What exactly is an ultrasound?

All types of ultrasound are a simple medical procedure which is otherwise known as a scan. This involves high frequency sound waves transmitted through the body and then picked up on a screen.

During pregnancy, a device known as a transducer is used to move along the mother’s abdomen and this sends sound waves via her abdomen and through her uterus. These sound waves bounce off the baby in the form of echoes. A computer picks up the echo messages and translates them into an image on the screen. As the baby moves and kicks, images can be seen on the ultrasound screen.

These sound waves are very high in pitch and intensity and cannot be heard by the human ear.

Ultrasound is a painless and non-invasive procedure. However, as you may need to have a full bladder if you are in the early stages of your pregnancy, it can be a little uncomfortable.

What's involved in a 3D ultrasound?

A 3D ultrasound takes thousands of pictures or photos of the baby at the once time. These are then translated by computer into 3 dimensional images which are almost as clear as a real life photograph. These “still” pictures of your baby mean that you can see your baby in three dimensions, rather than two.

There is a depth and shape to a 3D image, giving a clarity which is not as evident in a 2D ultrasound. This is because a 2D ultrasound sees through the baby to its internal organs and tissues. Whereas, with a 3D and 4D ultrasound the baby’s skin can be seen so there is more of a realistic shape and form to the images. This is particularly clear when looking at the baby’s face and delicate features.

With 3D ultrasounds, both the transducer used to transmit the sound waves and the computer software are more advanced and complex. This is why a 3D ultrasound is more expensive and generally not included in standard obstetric practice.

How are 2D and 3D ultrasounds different?

A 2D ultrasound takes image “slices” which can only be viewed by looking at one image at a time. Sound waves are sent to the baby and reflected straight back which means there is a rather flat, surface appearance to the baby. Whereas a 3D ultrasound involves taking thousands of “slices” in a rapidly occurring series called a “volume of echoes”. These send sound waves back at different angles, allowing for the characteristic 3D depth.

Once these pictures are stored and shaded by the computer, they can be seen on the screen as clearer, 3 dimensional images. The width, height and depth of the baby and its internal organs can be seen very clearly. With 3D ultrasound the baby has a more realistic shape and form, with distinctly baby type features and look exactly as they would if they were already born, only smaller of course.

Parents need to rely less on their imagination with a 3D ultrasound. It’s as if all the 2D images have been filled in and puffed out so the image is quite clearly a baby, rather than a grainy image on the screen.

What’s the benefit of having a 3D ultrasound?

Although it’s lovely to see the baby with some a clear image, there are no real health benefits to having a 3D ultrasound when compared to a 2D one. Since the late 1990s, 3D ultrasound has been available and thousands of parents have elected to have this done. Specialist obstetric scanning clinics provide 3D technology and parents need to pay to have this procedure.

When is the best time for me to have a 3D ultrasound?

Generally, the recommendation is between 26-30 weeks gestation, unless otherwise suggested by your maternity care provider. By this time, there is sufficient fat under the skin to see the baby’s facial appearance, rather than the supportive bony structure.

Some clinics claim that past 30 weeks of gestation, the baby’s head is more likely to engage in the mother’s pelvis so visualising the face can be more difficult. But this really depends on the individual clinic and their own practice guidelines.

How long will it take to have my 3D ultrasound?

A 3D ultrasound tends not to take as much time to complete as a 2D. This is because the images are so clear and they can be stored within the computer’s hard drive for later use if necessary.

Sonographers aim to finish doing the 3D ultrasound within 30 minutes of starting the procedure. This is to limit any potential side effects on the baby from being exposed to prolonged sound waves.

But I can't see a thing!

How much you see of your baby during the 3D ultrasound will really depend on the way they are laying. If your baby is facing outwards and there is enough amniotic fluid surrounding their little face, then you will be in luck. Even so, you will be able to see their back, shoulders, bottom and little limbs.

If, at the beginning of the scan your baby is facing away from the transducer, keep your fingers crossed that may move or rotate into a clearer position before the scan is finished. If your baby is curled up tightly, facing your back or has their hands covering their face, then you won’t be able to see much of their features.

If you are carrying a lot of weight around your middle, this could influence the clarity of the image you see. The sonographer may suggest you get up and go for a little walk or have a cold drink, talk to your baby or gently massage your abdomen. These strategies may help to encourage your baby to move into another position.

You may be given the option of taking home photos or a video of your 3D ultrasound. Check with the receptionist when you are making your appointment if you need to bring a memory stick with you.

Benefits of having a 3D ultrasound compared to a 2D

There are no definite medical benefits; however, if a defect has been identified a 3D ultrasound may provide better visualisation than a 2D. This may apply to issues such as a heart defect, cleft lip or a neural tube defect – for example spina bifida. Because of this early detection and awareness, planning for birth, postnatal care and management can begin very early. It can also help parents to know what they may be faced with when their baby is born, rather than needing to rely on their imaginations and the explanations of healthcare professionals.

Some parents find that having 3D ultrasound helps them to bond with their baby before birth. Having a clear view of their baby’s face and features, looking for family likenesses, knowing the baby’s gender and being able to see their baby makes a big difference.

At the time of the 3D ultrasound, some parents choose to name their baby and see this as a unique opportunity to build early emotional attachment. Yet, for others, they are happy to wait until when their baby is born and meet for the first time.

Colouring Your Hair During Pregnancy 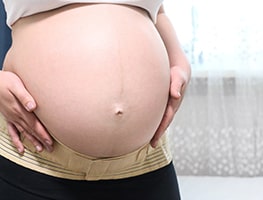